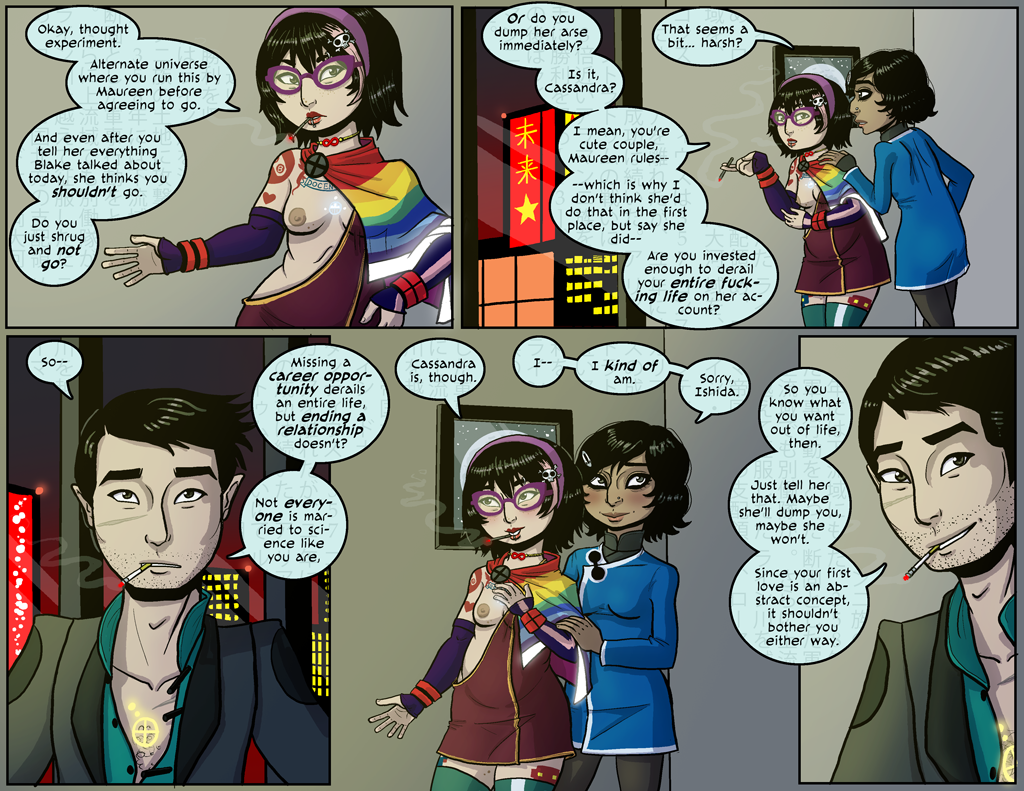 I probably should’ve noticed this earlier, but

(to the tune of http://www.youtube.com/watch?v=MFnmT82yGpk)

OK… why is Cassandra apologizing to Ishida? I mean, it feels in character and all… but it kind of sucks in the broader picture. He’s obviously a bit ego-hurt; that comment in the last panel is really harsh. And Cassandra probably picked up on that…

Takako is being really sensible, asking hard-but-very-useful questions. But I find I don’t like Ishida at all. I feel like I’m supposed to like him since Takako does… but I don’t. I’m wondering how long he and Takako will last – probably/hopefully not long, if he feels any of the contempt for Takako that he apparently does for Cassandra.

Anyway, I just think it’s a shame that Cassandra would apologize, to someone who has contempt for her, for making him feel bad by valuing science over romantic relationship (by projection… him). That’s messed up.

Thanks, Ben, for making such a beautiful comic. Looking forward to many more episodes! (If I could find a tip jar I’d put something in it.)

…OK, just re-read entire comic so far, including comments. Hadn’t realized that the line about him being 400 years old could be literally true. Puts a somewhat different spin on relationships (both romantic and platonic) when they involve people with that much life experience.

So I noticed that a couple of pages ago, Takako says _in front of her boyfriend_ that she’s terrible at relationships. Perhaps she’s not really pleased with him either? (And was this foreshadowed by Cassandra’s comment way back a few days ago, which might be read as implying that their relationship was mainly about the sex?)

Again, looking forward with great eagerness to more episodes! (And wishing I could go back and read the earlier incarnations, now that I know about them! Any chance of re-hosting them? Or selling them in ebook? I’d buy!)

I think he’s her date this evening, and an old friend (in every sense of the word “old”). Don’t know if he’s her boyfriend, though.

And I think he’s right – you need to know what’s important to you. Is it the emotional strength of a loving relationship, or the intellectual strength of a scientific career? If you can have booth, great, but if not, which do you choose? His question isn’t a dig at her, it’s completely legitimate.

I see no contempt from him towards the ladies – he just has a just a different outlook on life.

Where I saw contempt was “Since your first love is science, it won’t bother you if your partner dumps you.” He’s basically accusing her of being completely heartless and unfeeling. That’s totally untrue and uncalled for, and he knows it. So why does he attack her?

I think it’s because he’s unhappy with Takako because _her_ first love is science (not him). So he says something really cruel and undeserved to a friend of hers. Not very classy.

…and I just noticed it’s Takako, not Cassandra, who says that missing this opportunity will derail Cassandra’s life. So Ishido starts by objecting to Takako, and ends by insulting Cassandra when she (very tentatively) acknowledges that science is very important to her. Even less classy, and more evidence that he’s dumping his unhappiness with Takako on Cassandra.