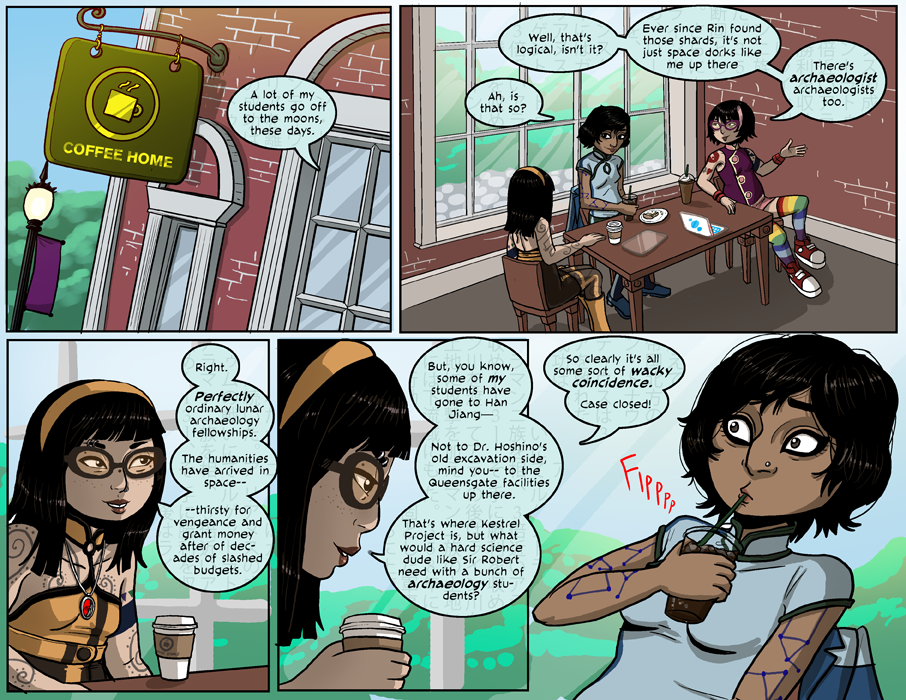 I used to be a reader back when you were doing The Midlands and only recently rediscovered your work. Glad to see you’re still making comics!

As to what the Kestrel Project is… my bet is that Sir Robert found some sort of complex bit of Seb machinery and needs some help figuring out what it does.

That seems to be the only logical explanation, yeah.

Or he’s trying to figure out how to make it work. It could hold unlimited power (electricity) or some kind of weapon.

Then there’s my little thought that he’s actually a vampire and wants to take over the world with a army of gouls (vampire zombie slave). But that’s just stupid, interesting, but stupid.

Random question for the author, that I’ve been meaning to ask:

If I recall correctly, the Kestrel Project is about developing a Lightspeed or Faster-than-Light space travel drive, yeah?
–> Is its name a reference to the spaceship simulation roguelike, Faster than Light? (http://www.ftlgame.com/)

I’ve never played Faster Than Light, so it’s not a reference to that. The name partly stems from the kestrel falcon, whose characteristic ability to hover in stationary air before diving is similar to certain aspects of Iotheran FTL technology for reasons which, for now, are tantalizing unstated.

It’s also a slight video game spaceship nod, but something older and more obscure than Faster Than Light. :V

Heh, here and I thought I was the only person who remembered Escape Velocity.

god the kestrel was soooo cooooooooooool

“Human”ties? So there is humans in this story?

I’m betting the elves (I think that’s what they’re called) actually evolved from humans. Another one is that the ruins they keep talking about is human civilization remains. Just food for thought…