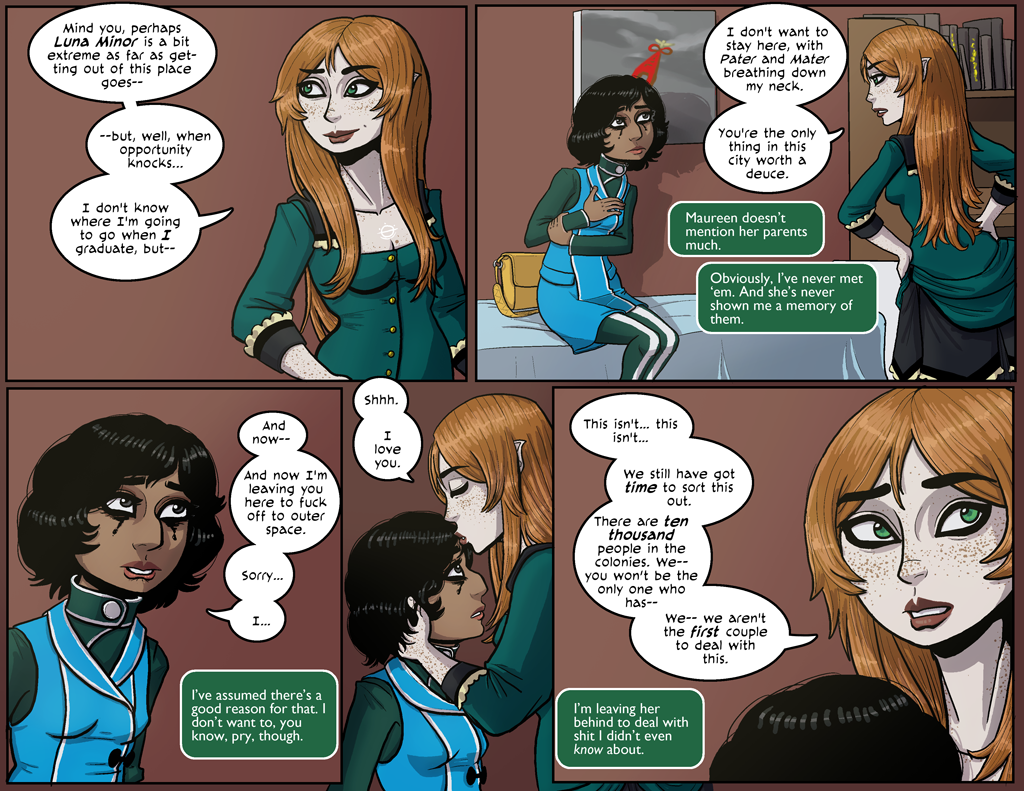 Huh… why is it “obvious” that she’s never met ’em, when she knows so little about them?

I hope it’s not because she’s trans. That would be sad.

Yes, I know that in the US it would be the most likely reason, and many other countries are far worse. And yes, I know Iotheran society is repressive in some ways. But she seems so comfortable with herself, her sexuality, her body – I’d like to imagine that this is in the context of a society where being trans is just not the kind of Big Deal (to others) that it is here.

And yes, I remember that she’s kept in touch with almost no one from her pre-transition days. But that could be for other reasons… I was a total hopeless social misfit in high school, and only started changing that when I got to college… I’m not trying to keep in touch with anyone who knew me back then.

I guess that, in addition to wishing I could read about a place where people’s sexuality and gender aren’t perceived negatively by other people, I think it would be a more intriguing story if the reason she couldn’t meet Maureen’s parents is something cultural or political, rather than prejudice about sex. Prejudice is just tawdry; cultural or political divides can be a lot richer to explore.

My interpretation was “I don’t know anything about them, so obviously I’ve never met them”

And the reason she doesn’t speak to anyone she knew before transition could be as simple as social dysphoria. She doesn’t want to interact with people who knew pre-transition her, because she knows they’ll remember pre-transition her. It doesn’t have to have anything to do with transphobia, necessarily

Yeah this is probably a good reason why. It is CRAZY awkward, especially ’cause I live in Indiana, where on average a lot of people are pretty conservative. I mean, I’m barely into my transition so I can still pass as a guy if I needed to, but I haven’t needed to do so since I left home. (But yeah basically it’s just super awkward, and while I hardly know anything about this universe, if it’s anything like ours, it could also be a measure to prevent oneself from getting murdered)

Man, Maureen looks like such a badass with her hair down.

id be more curious to hear about cassie’s family tbh.

thats awesome, i look forward to it. okay now i am curious to meet maureen’s parents after all, like, what makes them so bad. are they racist homophobes? can you imagine how awful it would be to have to wait for the older and more bigoted generations to die off when they’re elves?

“But DAA-ad, we’ve been seeing each other for nearly 300 years – why can’t she come to dinner?”

I bet elf parents have to worry a lot more about being murdered by their children since “natural causes” are right out.