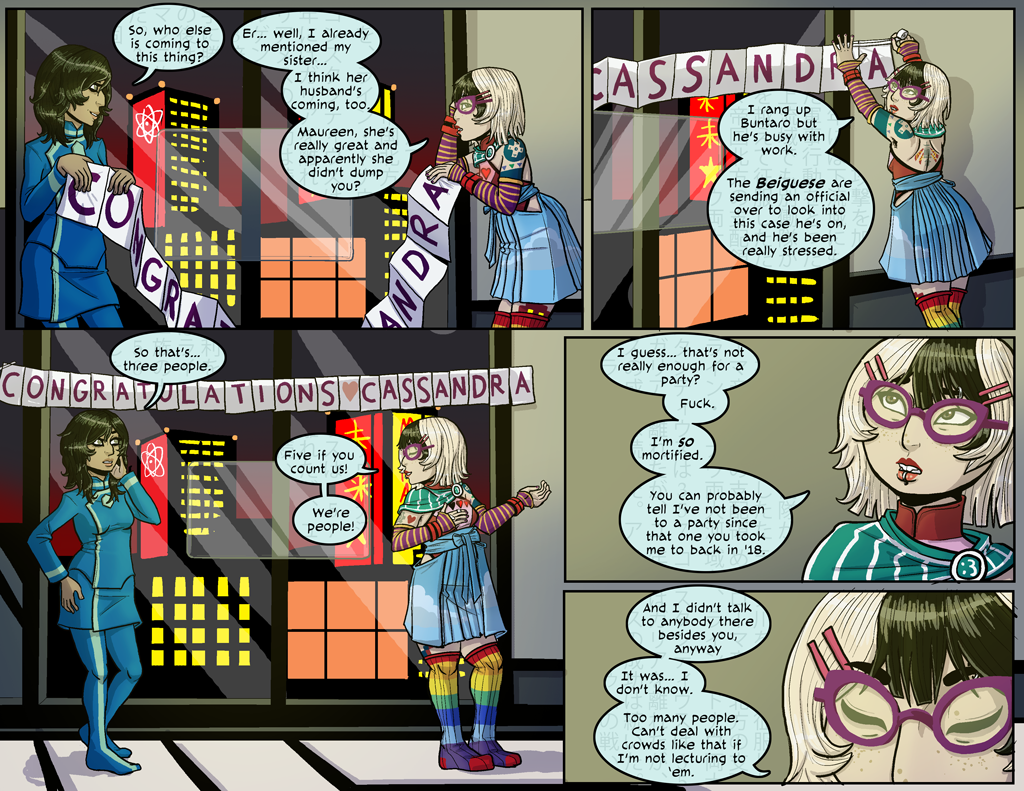 Merry Christmas! Hey, I read all of Heliothaumic, but it was quite a while back and I don’t remember Cassandra having a penis in that incarnation of the comic. Did she? And for that matter, the whole Cass-wang phenomenon has me confused as to whether there will ever be an explanation within the comic as to how Cass’s gender fits into the the elven reproductive scheme, given that there are “pure” males and females within the elven species. Totally not germane to this specific comic, but the question was bugging me, lol. Also, kudos to you for having naked people with non-statuesque body types in your comic.

what the fuck is a “pure male” or “pure female”? oh wait i know, you’re actually referring to cis people. because trans people are “impure” i guess, wow, what a novel stance you cissexist douche hose.

Wow, go figure somebody gets their gender nonspecific panties in a bind on the interwebs. I did not see that one coming. To answer your question, no, it does not mean cis people, as it has nothing to do with the person’s gender identity, and everything to do with a species demonstrating more biological sexes than are present in most species. So, if you’re quite done trolling and putting words in into others’ mouths, perhaps you could answer the question as to whether or not Cass had a penis in Heliothaumic.

why do i keep on getting comments like this

cassandra is trans in iothera. heliothaumic isn’t canon and doesn’t exist anymore. see also: like everything else about character backstories

i advise you to be more respectful to other commenters in the future since contrasting trans people with “pure males and females” is, in fact, gross and cissexist and jesse was right to call you out on it

“why do i keep on getting comments like this”

Because people are ignorant. However, yelling at a person for being ignorant doesn’t reduce their ignorance. The question was, indeed, offensive, but didn’t seem intentionally so based on the second post. It’s not easy trying to educate the world while keeping civil on a topic that touches you personally, especially when so many people are intentional douchebags.

If I may redirect, I recommend reading a couple of threads in a forum for a different comic with a trans* character. Several trans* members of that forum have done an amazing job of educating the forum’s population, and if more people were aware of the issues and how offensive the “innocent” questions of the ignorant can be, the world couldn’t help but be better.

It’s going to take time – I think of the representation of gay men on TV back in the 70’s (Barney Miller, in particular) compared with today, and society came a long way in 40 years. And there’s still a lot of bigotry. Trans people can’t afford to wait that long, the violence spawned by the bigotry is astoundingly greater and more hidden that that against gay people even 40 years ago. So many murders…

ANYway, that forum can be found here. They’re under the topic “Discuss”, which is only visible to members who have a certain number of posts (I think 100 or so) to avoid the transitory trolls. It should be more widely available, and if there were a forum for this comic I could repost some of the better resources that are linked in there.

Sorry for the wall of text, but I know a few people who have to live their lives on the edge because of this.

No one should have to.

It’s not that she is impure by being trans, but she isn’t fully male or female in body shape.
She is “pure” trans, I guess.
I think the original poster did not realize that she wasn’t born like that (and thought that elves possibly had girls with dicks naturally; after all they are a fantasy race), based on the comment about “How Cass’ gender fits into the elven reproductive scheme”

Why does this aspect of Takako’s personality not surprise me?

At parties, I stay by the food so I can put something into my mouth when someone comes up to me. Gives me time to calm down and think of a response…

I think it’s a form of performance anxiety – that is, we’re more comfortable “performing” (even an off the cuff lecture is scripted by the topic)than we are on our own!

Never ceases to surprise me how much hate comes from LGBT folks towards anyone who doesn’t have encyclopedic knowledge of every aspect of their life experience. Okay, I am sorry, mea culpa, I throw myself on the mercy of the interwebs and plead my pathetic cis-something ignorance. I made an oopsie when I asked the question the wrong way. I really am curious as to the nature of the character, however, and also to the larger implications when it comes to the fine art of world-building. To illustrate what I was actually asking in the first place, I would point to an oldie-but-goodie, Alien Nation, where a third gender of the alien species played an integral part in the reproductive cycle in ways humans struggled to understand. Something to the extent of providing a catalyst that made the males’ semen viable for fertilization, and all three genders needed to be present in order to achieve a pregnancy. So, what I am asking is this: Does Cass’s gender fit into any broader concept regarding the elven reproductive cycle or that of all beings within this world, or is she simply trans without any further implications whatsoever?

“sorry YOU’RE offended” is a pretty poor sort of apology

You picked up on that, did you? You get a cookie.

tl;dr version of bossfearless’ post: “If I hold any fault at all, it’s really because you’re all a load of touchy feely pansies. Boo fuckin’ hoo! Now let’s ignore my inability to actually truly admit that I done fucked up by sliding my casual bigotry (that managed to slip out during my smarmy-as-fuck non-apology) under the rug. AND ANSWER MY QUESTION, DAMMIT, THAT’S THE REAL PRIORITY HERE, BESIDES THIS HUGE STICK UP MY ASS.”

Which is a damn shame, because that question you asked actually is rather interesting, but instead of just simply admitting (without putting on snarky “airs”) that you accidentally phrased your question in a way that might be misconstrued as cis-sexist and re-stating your question, you decided to confirm everyone’s assumption of you being an uppity jerk. If people still got offended even if you tried not to be a raging douchebag, then ah well, you tried. But you didn’t, and that’s sad.

Midlands and Heliothaumic aren’t exactly in the same canon, but they do have a lot in common. The existence of half-elves, meaning people with combined human and elven ancestry, would strongly imply that from a biological standpoint elves and humans aren’t even different species. Even if it’s a case where hybrids have a weird chromosome count and are infertile, any degree of natural reproductive compatibility at all means things can’t be nearly as “alien” as you’re suggesting.